Welcome to my garage! This is a home of various little die-cast and non-diecast models that collected since the end of August, 2011. Well, have to say, the collecting little pieces of wonders is really addictive and...I love it. My wife loves it too (this is the cool part). I'd love to make friend and share my collection around, please leave your link in 'About' page if you're interested. Ok, say no more, enjoy!

The Mitsubishi Lancer Evolution, colloquially known as the Lancer Evo or just Evo,[1] is a high-performance sedan manufactured by Mitsubishi Motors. There have been ten official versions to date, and the designation of each model is most commonly a roman numeral. All use two litre, turbocharged engines and four-wheel drive systems.[2]

The Evolution was originally intended only for Japanese markets, but demand on the “grey import” market led the Evolution series to be offered through Ralliart dealer networks in the United Kingdom and in various European markets from around 1998. Mitsubishi decided to export the eighth generation Evolution to the United States in 2003 after witnessing the success Subaru had in that market with their Impreza WRX, a direct competitor in other global regions.[3] A re-badged version of the car has appeared in Malaysian markets as the Proton PERT, alongside Proton range of modified Lancers under the Proton Wira nameplate.

Japanese-spec cars were limited by a gentlemen’s agreement to advertise no more than 280 PS (206 kW; 276 hp), a mark already reached by Evolution IV. Therefore, each subsequent version has unofficially evolved above the advertised power figures, with the Japanese-spec Evolution IX reaching an alleged output of around 321 PS (236 kW; 317 hp). Various versions available in other markets, particularly the UK, have official power outputs up to 411 PS (302 kW; 405 hp).

The tenth generation of the Lancer Evolution was launched in Japan 2007, and overseas markets in 2008.

In 2001, Mitsubishi was forced by the FIA to race in the WRC using WRC rules for building a car instead of the Group A class rules, and thus did not need to follow homologation rules. The Evolution VII was based on the larger Lancer Cedia platform and as a result gained more weight over the Evolution VI, but Mitsubishi made up for this with multiple important chassis tweaks. The biggest change was the addition of an active center differential and a more effective limited-slip differential, while a front helical limited-slip differential was added. Torque was increased again to 385 N·m (284 lb·ft) with engine tweaks that allowed greater airflow, and horsepower officially remained at 280 PS (206 kW; 276 hp).

The introduction of the Evolution VII also marked the first time an automatic drivetrain was included within the model lineup—the GT-A. Seen as the ‘gentleman’s express’ version of the visually similar VII GSR, the GT-A model was only produced in 2002 and had the following distinguishing interior and exterior specification: GT-A-only diamond cut finish 17-inch (430 mm) alloy wheels, clear rear light lenses and all-in-one style front headlights (later used on the Evolution VIII). The GT-A had the option of either no spoiler, the short spoiler (as later used on the Evolution VIII 260) or the thunderspoiler as used on the standard Evolution VII models. The most distinguishing feature was a smooth bonnet with no air-grills on it at all. Although offering inferior cooling capabilities, the bonnet was designed to give a cleaner line through the air with less air resistance at motorway speeds.

Interior could be specified with factory options of a deluxe velour interior, full leather or the Recaro sports seats. The GT-A interior was different in that it had chromed door handles, a different instrument panel (to show the gear selection) and chrome edged bezels around the speedo and tach. The GT-A also had additional sound deadening installed from the factory and the engine manifold and downpipe had been engineered to be quieter.

The 5-speed automatic gearbox had what Mitsubishi called “fuzzy logic”, which meant that the car would learn what the driver’s driving characteristics were like and would adapt the gear change timings and kick down reactions accordingly. The gears could be manually selected as with most Tiptronics via steering wheel + and – buttons (a pair both sides) or via selecting the tiptronic gate with the gear lever. Power was down a little from the standard manual cars with 264 PS (194 kW; 260 hp). The GT-A gearbox did not appear again in the Evolution VIII but has been installed in the estate version of the Evolution IX Wagon. It was replaced by the Twin Clutch SST gearbox since the introduction of Evolution X. 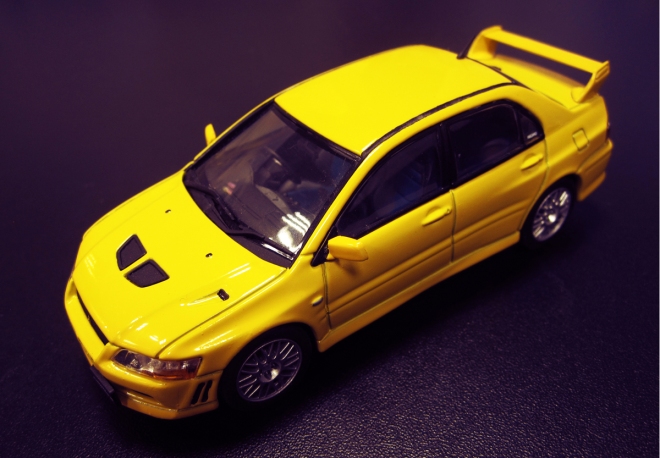